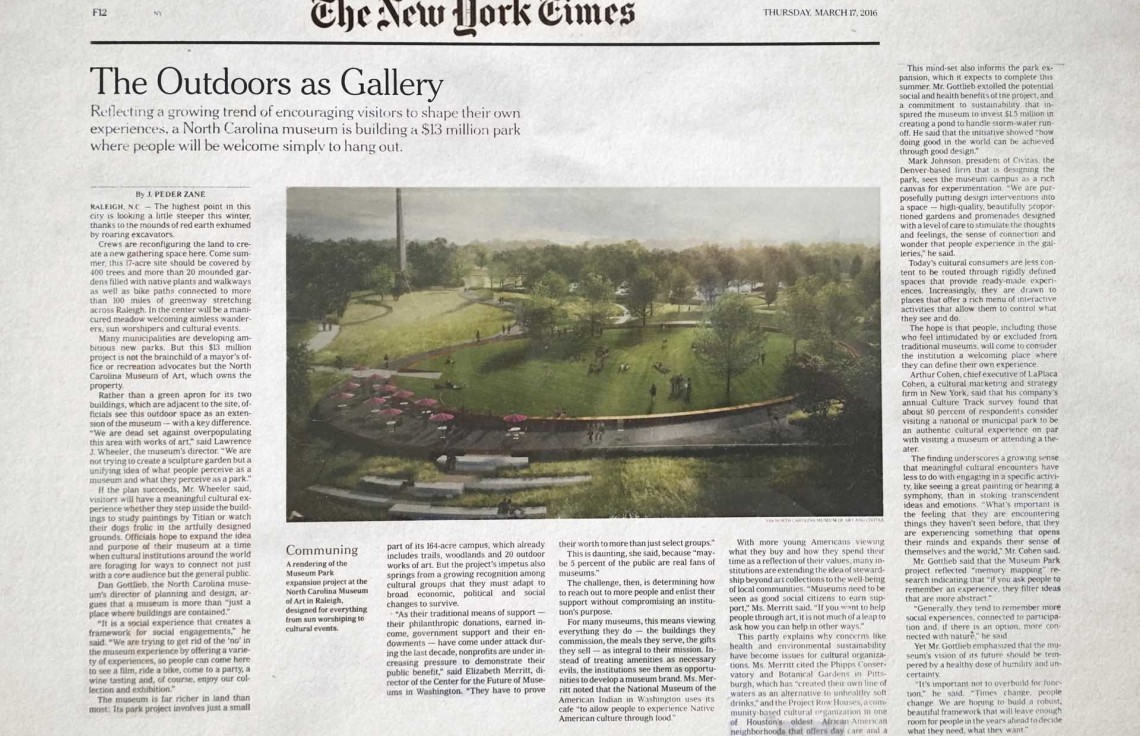 A Park as an Extension of the Museum Itself

RALEIGH, N.C. — The highest point in this city is looking a little steeper this winter, thanks to the mounds of red earth exhumed by roaring excavators.

Crews are reconfiguring the land to create a new gathering space here. Come summer, this 17-acre site should be covered by 400 trees and more than 20 mounded gardens filled with native plants and walkways as well as bike paths connected to more than 100 miles of greenway stretching across Raleigh. In the center will be a manicured meadow welcoming aimless wanderers, sun worshipers and cultural events.

Many municipalities are developing ambitious new parks. But this $13 million project is not the brainchild of a mayor’s office or recreation advocates but the North Carolina Museum of Art, which owns the property.

Rather than a green apron for its two buildings, which are adjacent to the site, officials see this outdoor space as an extension of the museum — with a key difference. “We are dead set against overpopulating this area with works of art,” said Lawrence J. Wheeler, the museum’s director. “We are not trying to create a sculpture garden but a unifying idea of what people perceive as a museum and what they perceive as a park.”

If the plan succeeds, Mr. Wheeler said, visitors will have a meaningful cultural experience whether they step inside the buildings to study paintings by Titian or watch their dogs frolic in the artfully designed grounds. Officials hope to expand the idea and purpose of their museum at a time when cultural institutions around the world are foraging for ways to connect not just with a core audience but the general public.

Dan Gottlieb, the North Carolina museum’s director of planning and design, argues that a museum is more than “just a place where buildings are contained.”

“It is a social experience that creates a framework for social engagements,” he said. “We are trying to get rid of the ‘no’ in the museum experience by offering a variety of experiences, so people can come here to see a film, ride a bike, come to a party, a wine tasting and, of course, enjoy our collection and exhibition.”

The museum is far richer in land than most: Its park project involves just a small part of its 164-acre campus, which already includes trails, woodlands and 20 outdoor works of art. But the project’s impetus also springs from a growing recognition among cultural groups that they must adapt to broad economic, political and social changes to survive.

“As their traditional means of support — their philanthropic donations, earned income, government support and their endowments — have come under attack during the last decade, nonprofits are under increasing pressure to demonstrate their public benefit,” said Elizabeth Merritt, director of the Center for the Future of Museums in Washington. “They have to prove their worth to more than just select groups.”

This is daunting, she said, because “maybe 5 percent of the public are real fans of museums.”

The challenge, then, is determining how to reach out to more people and enlist their support without compromising an institution’s purpose.

For many museums, this means viewing everything they do — the buildings they commission, the meals they serve, the gifts they sell — as integral to their mission. Instead of treating amenities as necessary evils, the institutions see them as opportunities to develop a museum brand. Ms. Merritt noted that the National Museum of the American Indian in Washington uses its cafe “to allow people to experience Native American culture through food.”

With more young Americans viewing what they buy and how they spend their time as a reflection of their values, many institutions are extending the idea of stewardship beyond art collections to the well-being of local communities. “Museums need to be seen as good social citizens to earn support,” Ms. Merritt said. “If you want to help people through art, it is not much of a leap to ask how you can help in other ways.”

This partly explains why concerns like health and environmental sustainability have become issues for cultural organizations. Ms. Merritt cited the Phipps Conservatory and Botanical Gardens in Pittsburgh, which has “created their own line of waters as an alternative to unhealthy soft drinks,” and the Project Row Houses, a community-based cultural organization in one of Houston’s oldest African-American neighborhoods that offers day care and a laundromat.

This mind-set also informs the park expansion, which it expects to complete this summer. Mr. Gottlieb extolled the potential social and health benefits of the project, and a commitment to sustainability that inspired the museum to invest $1.5 million in creating a pond to handle storm-water runoff. He said that the initiative showed “how doing good in the world can be achieved through good design.”

Mark Johnson, president of Civitas, the Denver-based firm that is designing the park, sees the museum campus as a rich canvas for experimentation. “We are purposefully putting design interventions into a space — high-quality, beautifully proportioned gardens and promenades designed with a level of care to stimulate the thoughts and feelings, the sense of connection and wonder that people experience in the galleries,” he said.

Today’s cultural consumers are less content to be routed through rigidly defined spaces that provide ready-made experiences. Increasingly, they are drawn to places that offer a rich menu of interactive activities that allow them to control what they see and do.

The hope is that people, including those who feel intimidated by or excluded from traditional museums, will come to consider the institution a welcoming place where they can define their own experience.

Arthur Cohen, chief executive of LaPlaca Cohen, a cultural marketing and strategy firm in New York, said that his company’s annual Culture Track survey found that about 80 percent of respondents consider visiting a national or municipal park to be an authentic cultural experience on par with visiting a museum or attending a theater.

The finding underscores a growing sense that meaningful cultural encounters have less to do with engaging in a specific activity, like seeing a great painting or hearing a symphony, than in stoking transcendent ideas and emotions. “What’s important is the feeling that they are encountering things they haven’t seen before, that they are experiencing something that opens their minds and expands their sense of themselves and the world,” Mr. Cohen said.

Mr. Gottlieb said that the Museum Park project reflected “memory mapping” research indicating that “if you ask people to remember an experience, they filter ideas that are more abstract.”

“Generally, they tend to remember more social experiences, connected to participation and, if there is an option, more connected with nature,” he said.

Yet Mr. Gottlieb emphasized that the museum’s vision of its future should be tempered by a healthy dose of humility and uncertainty.

“It’s important not to overbuild for function,” he said. “Times change, people change. We are hoping to build a robust, beautiful framework that will leave enough room for people in the years ahead to decide what they need, what they want.”