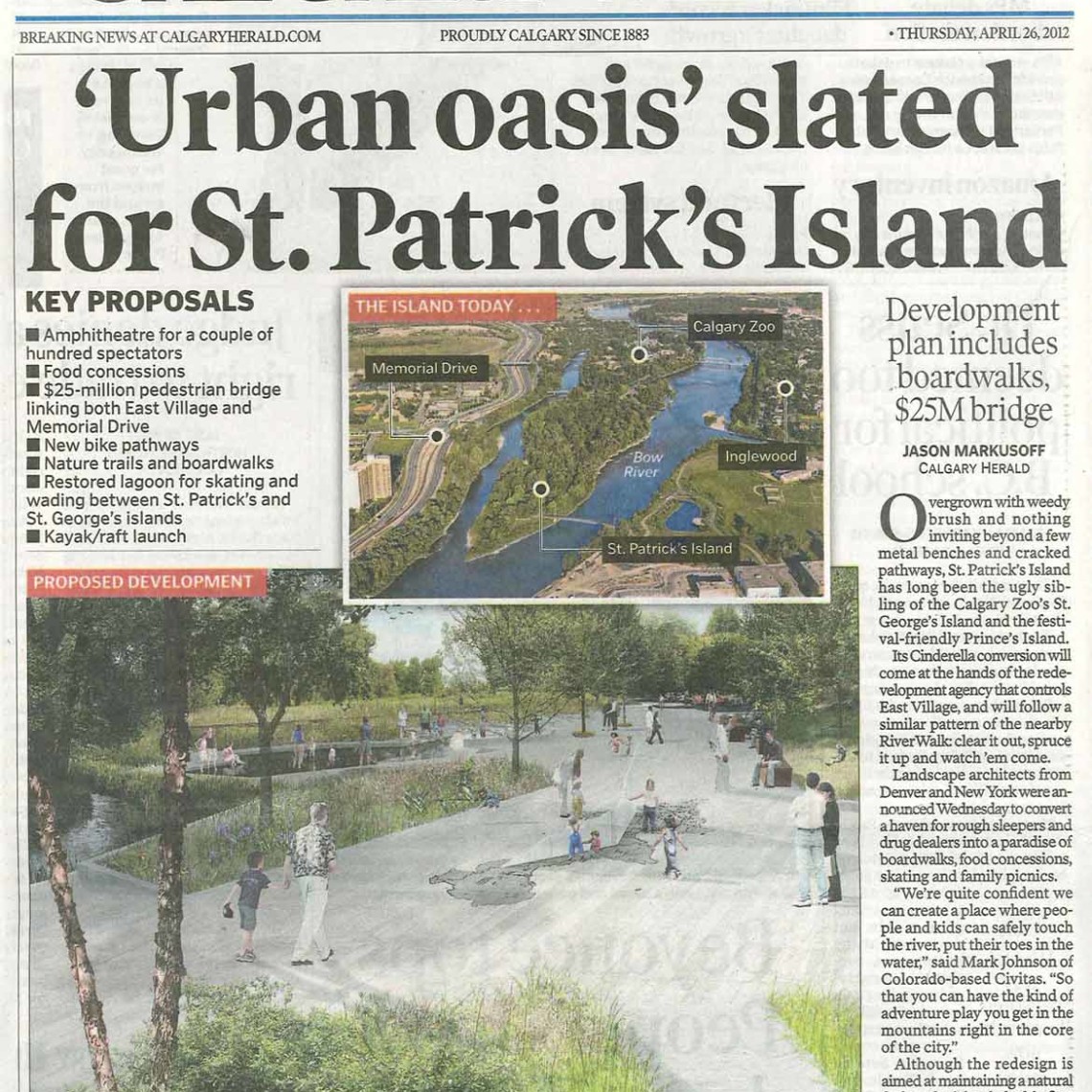 Calgary, Alberta — Overgrown with weedy brush and nothing inviting beyond a few metal benches and cracked pathways, St. Patrick's Island has long been the ugly sibling of the Calgary Zoo's St. George's Island and the festival-friendly Prince's Island.

Its Cinderella conversion will come at the hands of the redevelopment agency that controls East Village, and will follow a similar pattern of the nearby River Walk: clear it out, spruce it up and watch 'em come.

Landscape architects from Denver and New York were announced Wednesday to convert a haven for rough sleepers and drug dealers into a paradise of boardwalks, food concessions, skating and family picnics.

"We're quite confident we can create a place where people and kids and safely touch the river, put their toes in the water," said Mark Johnson of Colorado-based Civitas.  "So that you can have the kind of adventure play you get in the mountains right in the core of the city."

Although the redesign is aimed at maintaining a natural feel on the island, the big first step will be razing invasive species of shrubbery and trees that have provided cover for the sleeping homeless.

It will have better "visual access" and much better lighting, Johnson said.

We want it to be attractive and we want to pull people down to it, but we still want it to feel like it's an urban oasis.

"Being on an island comes with the connotation that you're getting away a little bit - that you're not in the heart of things, that you're a little isolated and that's special," Johnson said.

"Well, today, as soon as the leaves come out, you cross the bridge and you get on the island, you don't realize you're on an island, because you're enclosed in the woods.  So we'd like to do some opening."

Civitas has overhauled a riverside stretch in Denver while partner W Architecture of New York did the same with the part of Harlem along the East River.

But the head of Calgary Municipal Land Corp. said the redesign will do more than take cues from nature.

"One of the key pieces of feedback we got from Calgarians is don't over-landscape the setting. Yes, we want it to be attractive and we want to pull people down to it, but we still want it to feel like it's an urban oasis," Michael Brown said.

A lagoon will be restored between St. Patrick's and St. George's islands, for wading and winter skating.  Next to it will be an amphitheatre for a couple of hundred spectators, as well as food concessions.

An open event space will mark the centre of the island, and its west tip will be crowned by a $25 million pedestrian bridge connecting to both the Memorial Drive and East Village.

It will be built by Graham Construction - the same firm that delivered the Peace Bridge nearly 1 1/2 years behind schedule.  However, a different team within the Calgary-based infrastructure giant will deliver this unnamed bridge, a simpler double-arch crossing designed by French firm RFR.

"Not as complicated for the construction, no," said Bill Campbell, Graham's operations manager on this project as well as the on-time, on-budget 4th Street S.E. underpass.

The bridge and island will be funded through the same "revitalization levy" loan that will be recouped through property taxes by new development in East Village and the downtown's east end, including The Bow office tower.

Brown said the island will find its "niche" by welcoming smaller festivals than could fill Prince's Island, which was named one of the top 10 public spaces in Canada last year by Spacing magazine.

The architects of St. Patrick's Island have an opportunity that didn't exist with Prince's Island - to reinvent the whole thing all at once.

The downtown's largest park space was redesigned in stages - first in the 1960s, and then again in the 1990s, with the addition of the eastern wetlands and a massive stage.

"A lot has changed when it comes to incorporating natural areas and park design," Ald. Druh Farrel said.

Ald. Gian-Carlo Carra said the addition of an eatery like another River Cafe would create a "sense of ownership" on the island.

"Public spaces need mayors, whether it's the guys who run the kiosk or people who have a legitimate commercial reason to be there to ensure that a space is well kept up and makes sure that the bad guys don't set up shop," he said.

A restaurant is also a key feature of the revamped Central Memorial Park.